One of the first gravel bikes that I ever laid eyes on was the Open Upper. Our Gravelution.com friend & neighbor, the esteemed Stewart Gray (bio below), rolled it around our neighborhood in early 2016, and we were smitten. Seeing as I have never actually ridden an Open Upper, we asked Stewart to do us the favor of giving us his thoughts. Take it away Stewart! 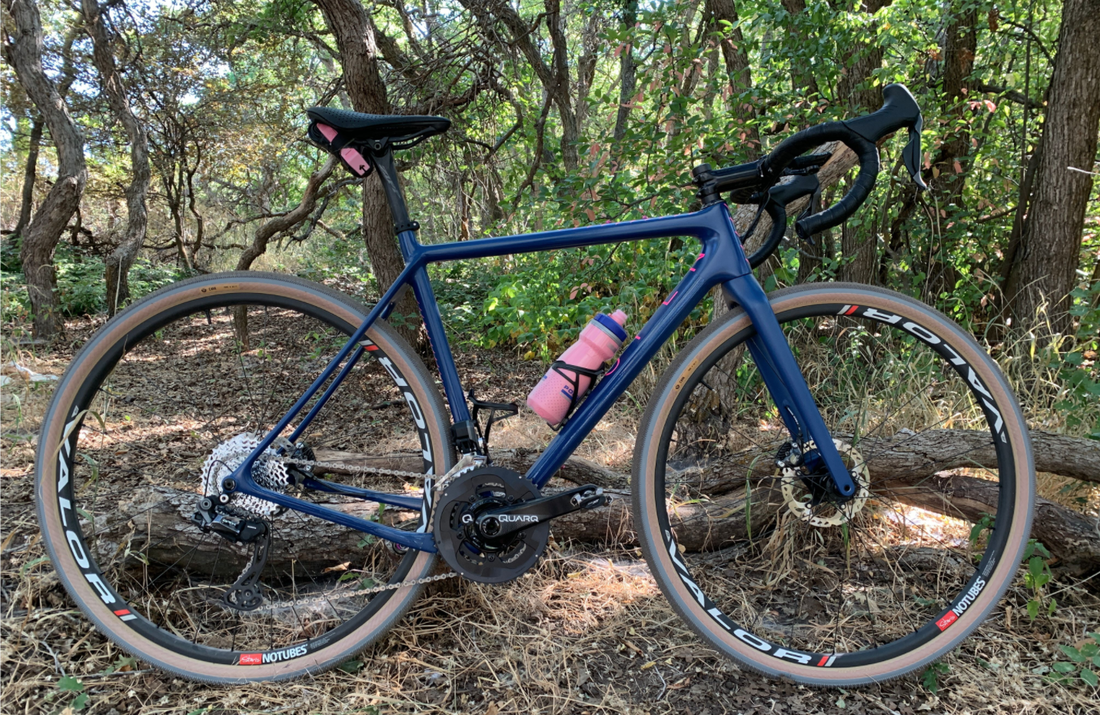 Stewart's beautiful Open Upper somewhere in the Wasatch Foothills
"Nearly every bike review ends up in the same place.  In most cases it is a thinly veiled attempt at objectivity based on the hope that the writer can get more free kit to try out.  So any attempts to really analyze the bike are typically overridden by that desire.  There are few reviewers out there who have the clout to really review a bike and put it out there for the world to see.  So in the end, they give a review with a few Pros and Cons and they use copious amounts of nickel phrases like compliance, stiffness, stability, etc..  These ARE real things and they do matter.  But most of us wouldn’t know what that felt like even if it slapped us in the leg with a greasy chain.

So my review of the Open Upper is long term love affair of sorts.  I was an early adopter of the gravel movement, buying my first Open UP after seeing them at Interbike in October of 2015.  I was smitten with the monochromatic orange bike with the weird chain stay.  I would order mine in the early months of 2016 and build it into a gravel bike with a leaning towards my new found love of Cyclocross.  Back in 2014,  I decided to try my hand at the Crusher in the Tushar.  A 70 mile leg busting, nearly 11,000 of climbing, 35 miles of gravel; race bordering on the Cliffs of Insanity.  My mistake would be trying to make this bike into a gravel racer and a purpose built cyclocross machine.  While the bike performed admirably at gravel races, it was not performing as a cyclocross rig at the level I wanted to race.  So I traded in the Open UP for a purpose built cyclocross killing machine.  The moment I traded the bike away, I longed to be back on it.  Just two weeks prior, I had decided to mount up road tires to the Open UP and it was on some long rides into the mountains that the bike really came alive.  But the die was cast.  I owned a high end carbon road bike that was everything I needed for riding on the road and racing and so I didn’t see the need for another road rig, as much as I had loved those rides.  So after just a year of ownership the Open UP was traded off and I tried to forget my relationship with that bike.  Trying to forget did not go well and my local go-to shop Contender Bicycles did everything they could to make the parting more difficult as they secured unpainted Open frames.  The idea of a custom painted frame was something I had always dreamed of.  So I longed for another Open but could never justify the expense.

In late 2018, a local legend of a crit course was sold off for development and my need for a road race bike dwindled.  It was after talking with the folks at Gravelution.com that I realized maybe that the longing I was having for the Open UP was a sign I needed a change.  Instead of trying to find a gravel bike to add to my barn, or using my purpose built CX bike as a frankensteinian  gravel bike, I realized that the reason for the Open was to replace not my CX bike, but my road bike.  Most gravel bikes trend towards relaxed stable geometries that lend themselves towards comfortable rides on long straight gravel roads.  Those kind of gravel bikes do not do well as a Quiver Killer when attempting to use them as a road bike (at least in my humble opinion).  The Open UP and UPPER (lighter version of the UP), are unapologetic race pedigreed gravel bikes.  Once I realized I had been trying to replace the wrong bike(s) in my first relationship with the Open, I came to terms with my errors in our previous time together and recommitted to reinvesting in us.  It didn’t hurt that the Open UPPER had lost weight, and came with so many options for livery, I didn’t know where to start.  I won’t go in to detail on the paint and the choice of colors, as that is a subject for another review altogether.

So enough about how we met, and let’s get on to the details of how the Open UPPER rides.  There are dozens of articles that explain the geometry, carbon layup and the multitudinous wheel choices, so I won’t bore you with that kind of data.  This review is about a love affair.  So not only are the lines on the Open clean and purpose built, which alone increases heart rate, but it is just so fun to ride.  Why?  After years of training for the local crit series and seeing the same roads week after week, month after month, year after year, the Open has caused me to fall in love not only with itself, but with the self same roads I had all but grown numb to.  I started to see rough shoulders and alligator pavement as a whole new adventure and the Open was OPEN for all of it.  It has few, if any, inhibitions.  After rides up my favorite local road climb, I would tack on 3-4 miles of single track on trails normally reserved for my mountain bike.  While it was not about to replicate the ride of my mountain bike, it did add a new facet to riding my bike.  What I discovered was that my face was aching at the end of riding.  Unlike the ache I had from making out with my soon to be wife too many years ago to mention, my face was aching because there was a smile wrapped across my face, that just wouldn’t go away.  Not the advent of a worldwide pandemic and apparent impending financial doom could rip the enjoyment out of riding a bike that loved to carve up the pavement or slice a single track or barrel along gravel roads at speeds that were on the edge of scary.  I had finally found the sweet spot in our relationship.  Gone was the desire for a pro peloton world tour worthy race rig.  Even though I typically lust for the latest tech, strangely I found myself with an almost fanatical focus on the Open UPPER.  I realized that for once in my bike loving life, I had found a true life time partner.  While our first attempt had gotten off on the wrong foot, we had sorted out our relationship concerns.

Months on, I enjoy dressing the Open UPPER up for the occasion.  Whether it is running my Reynolds AR 41’s shod in 32 Terravail Ramparts or ripping gravel and single track on my now dated Stan’s Valors outfitted in Ultradynamico Cava 42??, the result is the same.  I am having fun on my bicycle.  I am adventuring on old worn out rides that now seem new and fresh.  Gone are any desires to PR on Strava or chase fellow riders.  I am on an adventure on every ride.  I am now looking for places to take my Open on dates, and though I typically am fundamentally opposed to driving to ride, I admit I have snuck the Open UPPER on a few road trips that may have just been for the two of us looking for a place to find more adventure.

​I wanted to impress the Open UPPER so I picked up Shimano Di2 GRX 2x and added a Quarq power meter just in case I cared about training.  I dressed the cockpit up in Zipp SL carbon and Service Course SL bits and kept the look clean by doing the bar end junction for the Di2 cables.  Contender Bicycles (Salt Lake City) did an amazing job building the bike and prepping it for all the adventures I might find.  While I think the Shimano/Zipp build is a welcome addition, I think this bike would be just as happy with whatever someone could come up with to dress it up.
Unlike my wife who is a one of a kind, the beauty to the Open UPPER is that it is available to anyone willing to shell out the dollars at a few select dealerships throughout the country and can be purchased with factory paint or picked up RTP (Ready To Paint).  Contender Bicycles even sells them online and will do a concierge service on your bike.  They really are one of the best shops in the country.
About the Author:  Stewart is a middle aged working class dad of three who loves all things bicycles.  He loves how they look, how they work (and sometimes don’t).  He enjoys pretending to know how to work on bikes and he even looks forward to cleaning them after a rough ride in the hills.  He fell in love with riding bikes at a young age and became entranced with bike racing as a result of the 1984 summer games in Los Angeles.  Watching Nelson Vails smash the planks and Alexi Grewal steal the show in the road race awoke something in him that still burns today.  By day he practices architecture but his mind is never far from his two wheeled friends.
© COPYRIGHT 2019. ALL RIGHTS RESERVED.