I am currently riding this brand new carbon fiber 2020 Cannondale Topstone Ultegra RX2. And I'm having some serious fun on it. 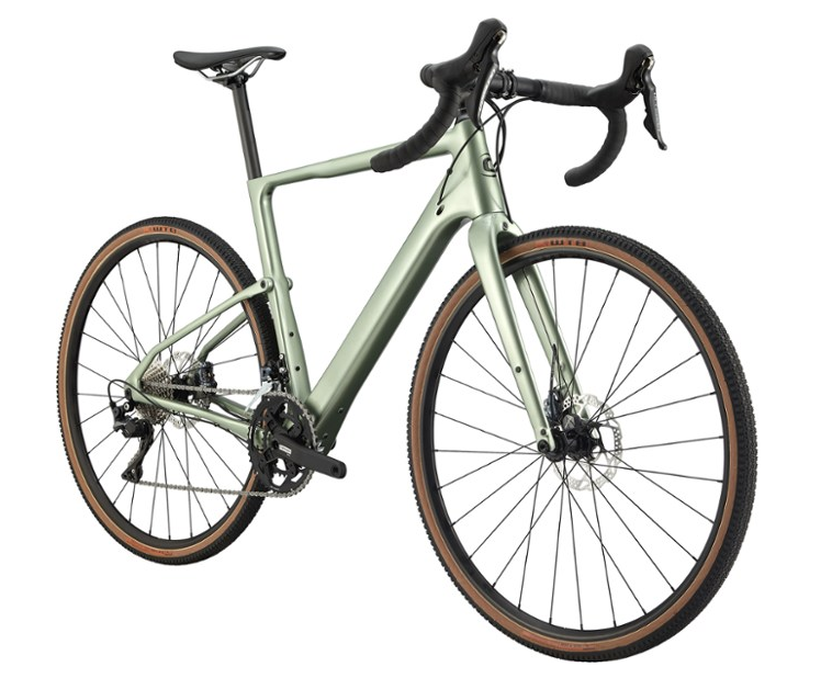 So Cannondale is touting this gravel bike as "revolutionary" (or better said, "gravelutionary") because the 30mm of suspension on the rear triangle is a super light alternative to a shock or fork, thereby giving a rider better comfort on dirt, and more fluidity on pavement.

I'm gonna give this bike the business over the next few months. But below is where I've taken it, AND where it'll be going: 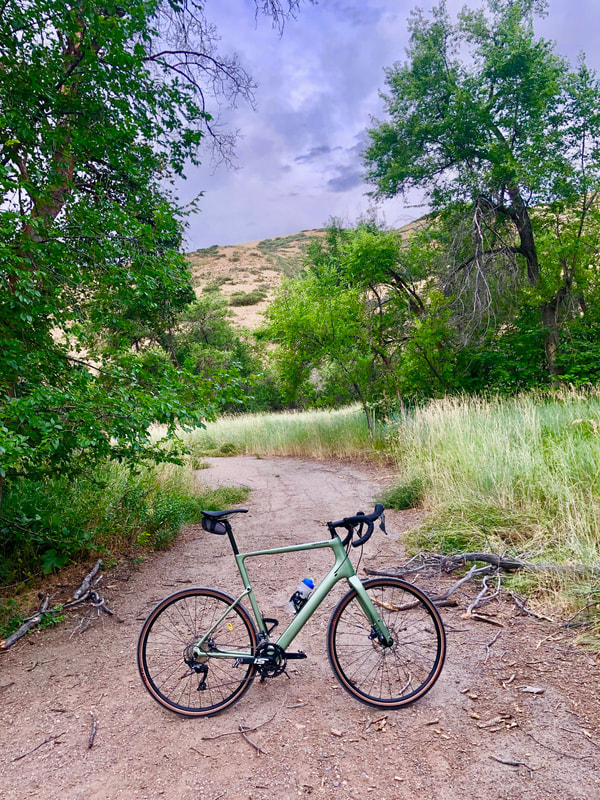 This was my FIRST ride on the Topstone. I rode from my driveway in the Sugarhouse neighborhood of Salt Lake City, along poorly surfaced roads toward the hills, up the gravel road in Red Butte Canyon, down a brief singletrack, and back home on pavement.

Out of the box, the bike rides really nicely. It feels stable, but not slow. The suspension on the rear triangle is "subtle," which is good. It's almost "not noticeable"?

But what I loved the most on this initial ride is how this bike handles the road. It felt like a straight-arrow-tank through gutters, around corners, over cracks, and along surfaces that otherwise require VERY delicate riding if you're on your road bike.  And there's serious value to me in that, because a lot of the roads I ride look like this: 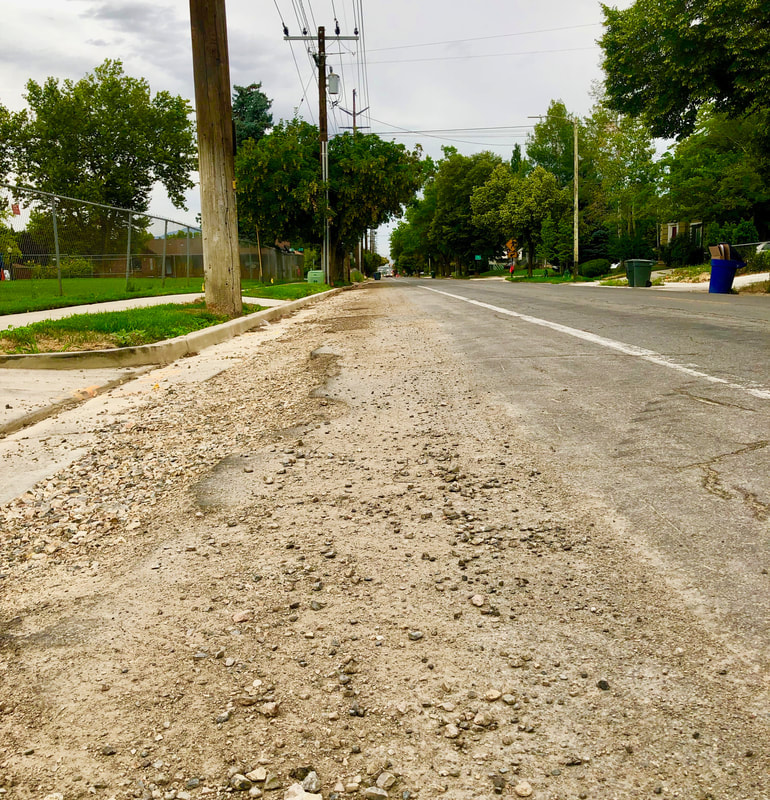 So all in, the Topstone was a full success for a first morning ride on some pavement & some gravel . . . 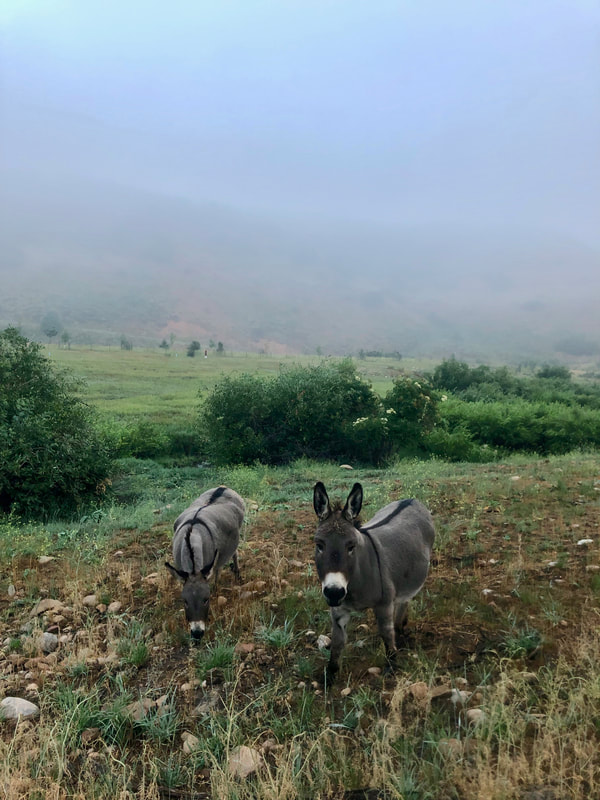 The Topstone felt really good on that dirt road. I was impressed with how it straight-lined down washboard descents (if I was on the drops, not so much on the hoods), and it pedaled nicely over everything else.

Eventually, the gravel road kicked me onto paved rural county roads. And here, the Topstone was stellar again. Honestly, it felt just fine on the road. Like a good road bike. And when a truck would approach from behind, I'd veer to the shoulder and the bike would plow through gravel, elk droppings, sand, or road kill ( . . . I didn't actual HIT any road kill, but you get it). I would describe its road ability as "steady & straight." There was no "twitch" to it on rough stuff like you get with a road bike.

And yes, eventually I made it to Henefer, Utah. Unfortunately, everything was closed. 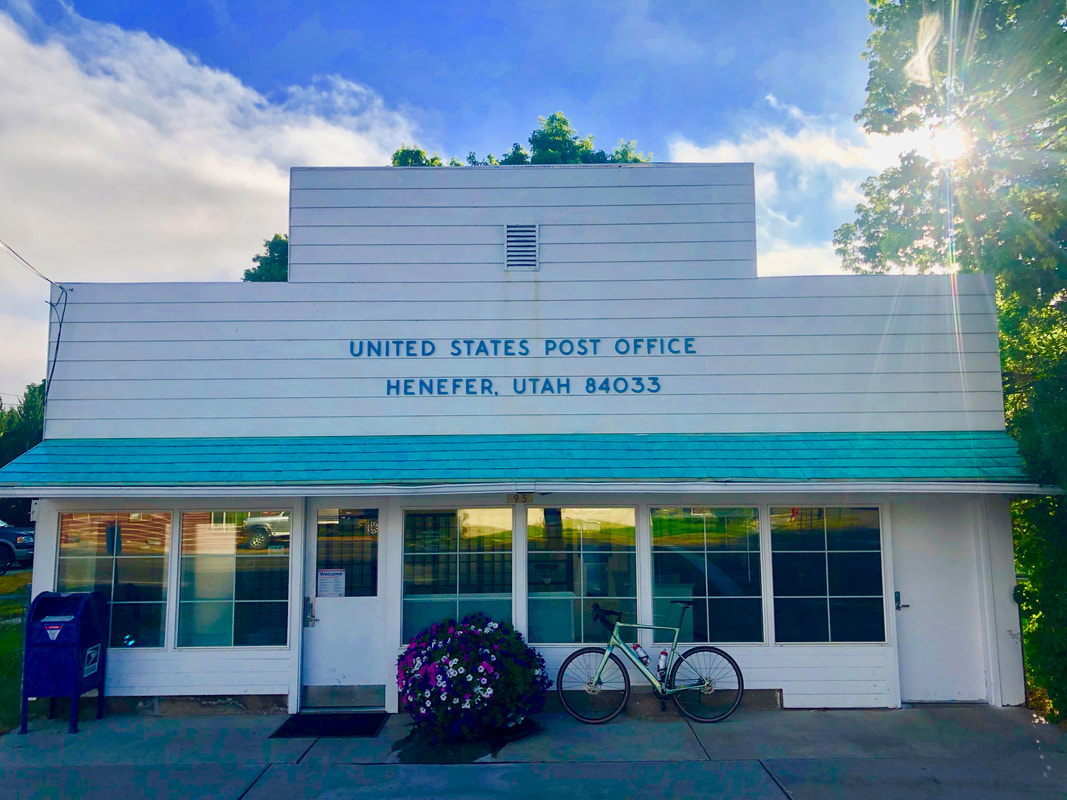 ​And just look at this premium Park City gravel . . . 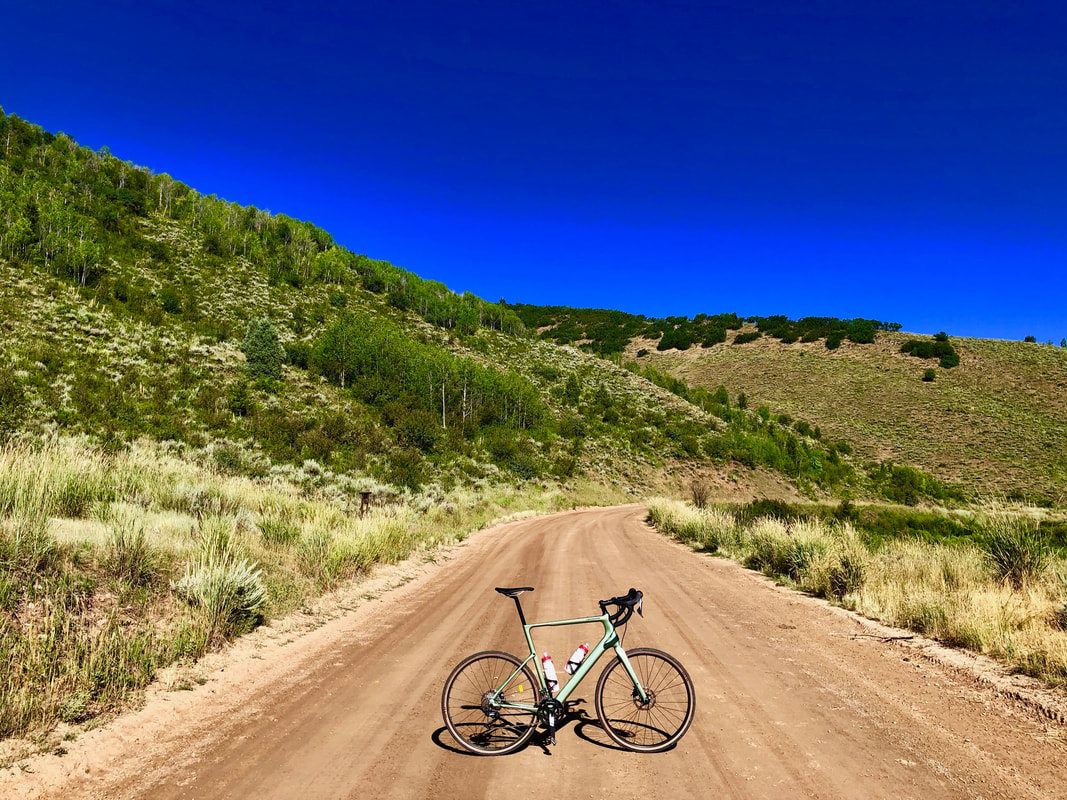 I am still getting to know this Cannondale Topstone. But the initial feel is very promising. Stay tuned for more. 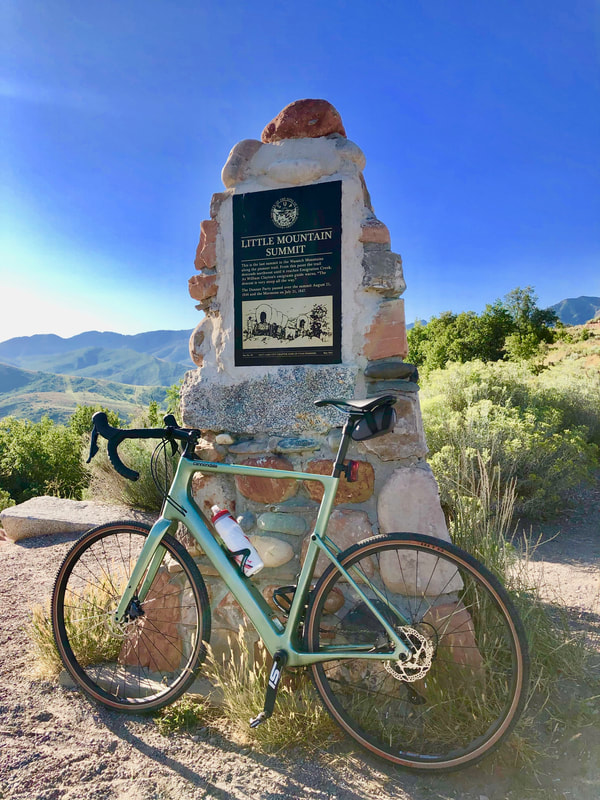 The purpose of this ride was (i) to test the Topstone on my core road ride (Emigration Canyon) and (ii) then detour to a good dirt road up Killyon Canyon.

I really wanted to see how the Topstone performed on the 7.5 mile paved Emigration Canyon road. It's a very popular Salt Lake City road ride. I've ridden it 11 times in 2019, and below are my times to the summit:

Taking into account that each ride is affected by fatigue level, wattage differences, and wind, this is a pseudo-scientific way of gauging how much the Topstone would slow me down on a legit road ride. The result?

LITERALLY ONE SECOND SLOWER than my average.

Conclusion: The Topstone is virtually as fast on the road as my road bike. Very interesting.

And now for the fun part . . . I took the Topstone up an ancillary dirt road called Killyon Canyon. And that's the beauty of this bike. When the road turns from pavement to dirt (see below) you don't have to stop: 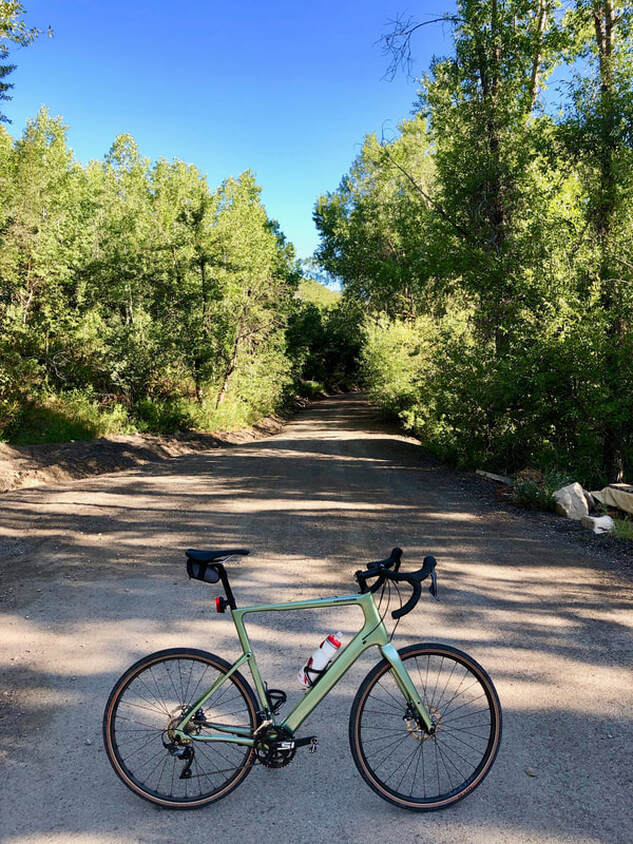 4) Park City to Wanship to Coalville to Park City

50 Miles
(95% Gravel & 5% Pavement)
​This is a dandy of a gravel ride. Not too much elevation gain or lost, so it gave me a good chance to just pedal the Topstone on 50 miles of nice gravel. The ride follows the "Rail Trail" out of Park City, through Wanship, and then on to Coalville. 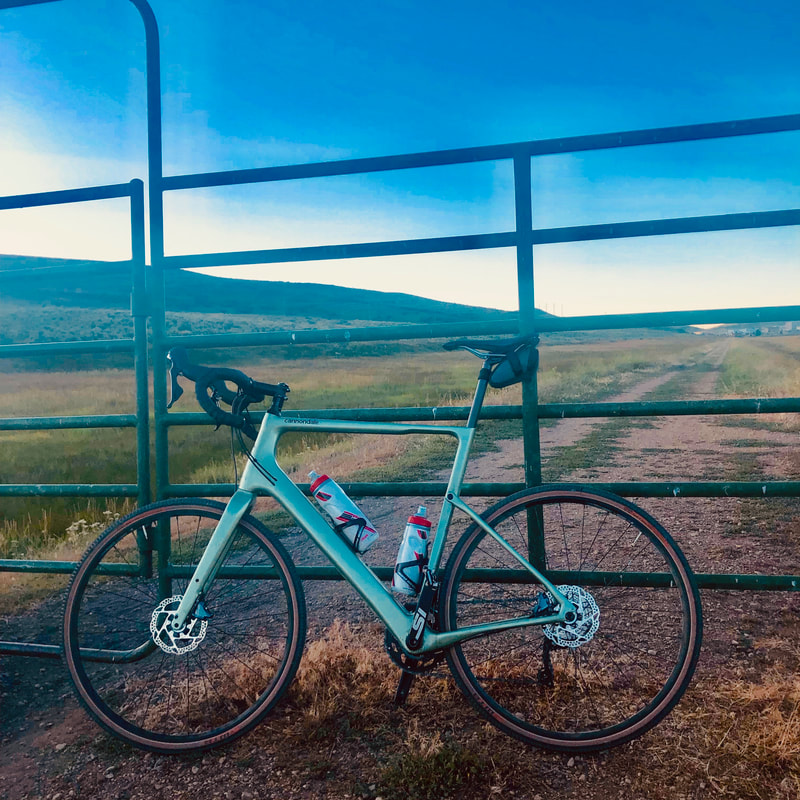 After an odd encounter with a bobcat that wouldn't move off the road (long story), I settled in and had a lovely 50 miles. What impressed me most (again!) was the Topstone's ability to descend. In short, from Park City to Wanship, the road is a slight dirt descent for 10+ miles. When you put the Topstone in the big ring, and hold on to those wide drops, the bike FLIES. I can't get over how well it descends. Tons of fun!

And then to ensure that I hadn't misread the experience, a few days later I rode it in reverse, from Coalville, to Wanship, to Park City (where I had a bagel and a beverage). And the Topstone didn't deceive me . . . it was just as much fun as the previous day.

Conclusion: I am still waiting to discover the bike's deficiencies . . . 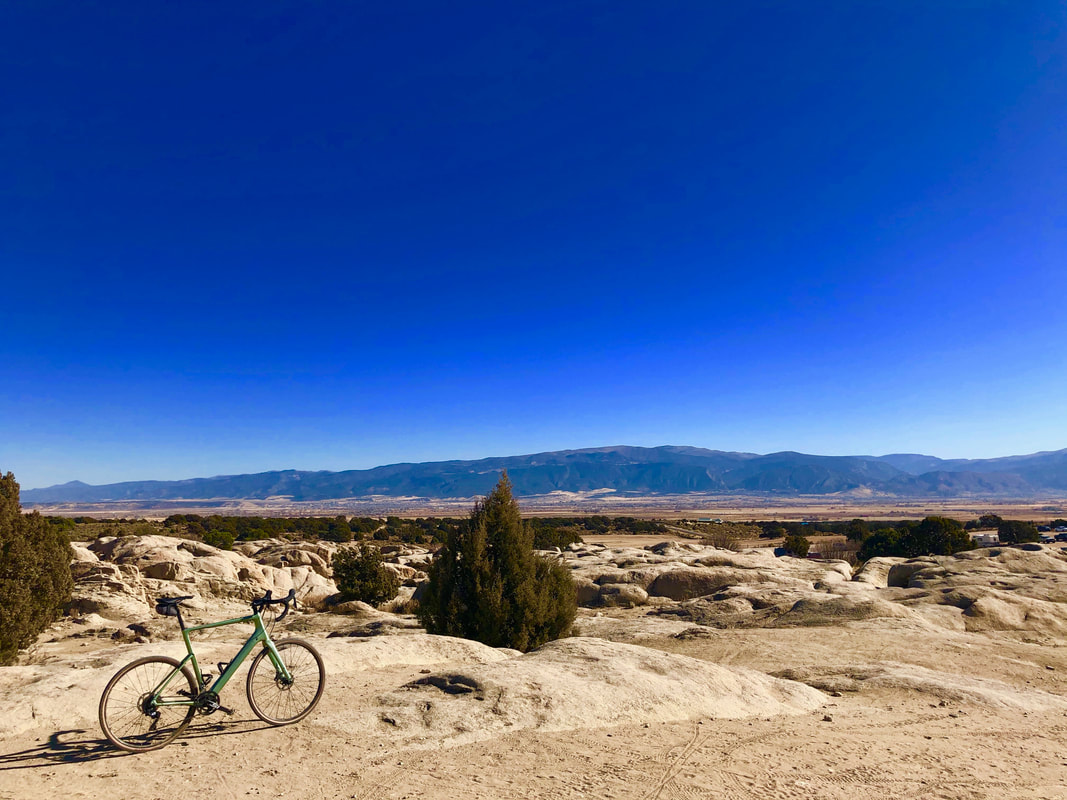 I traveled from Salt Lake City, down the spine of Utah, to Cedar City to race the UTCX's one-and-only gravel grinder race. But, this report is going to be brief.  As I was descending a gravel road full of washboards, I got a sidewall puncture and my day was done. So, maybe the stock WTB Riddler TCS "Light" tires are too light? Or maybe I just was riding too aggressively? Or maybe a little of both?

And yes, I was running them tubeless. But the sidewall puncture was significant enough that the sealant would not seal it. By the time I found a plug, I was 30 minutes behind the race. Day Done! 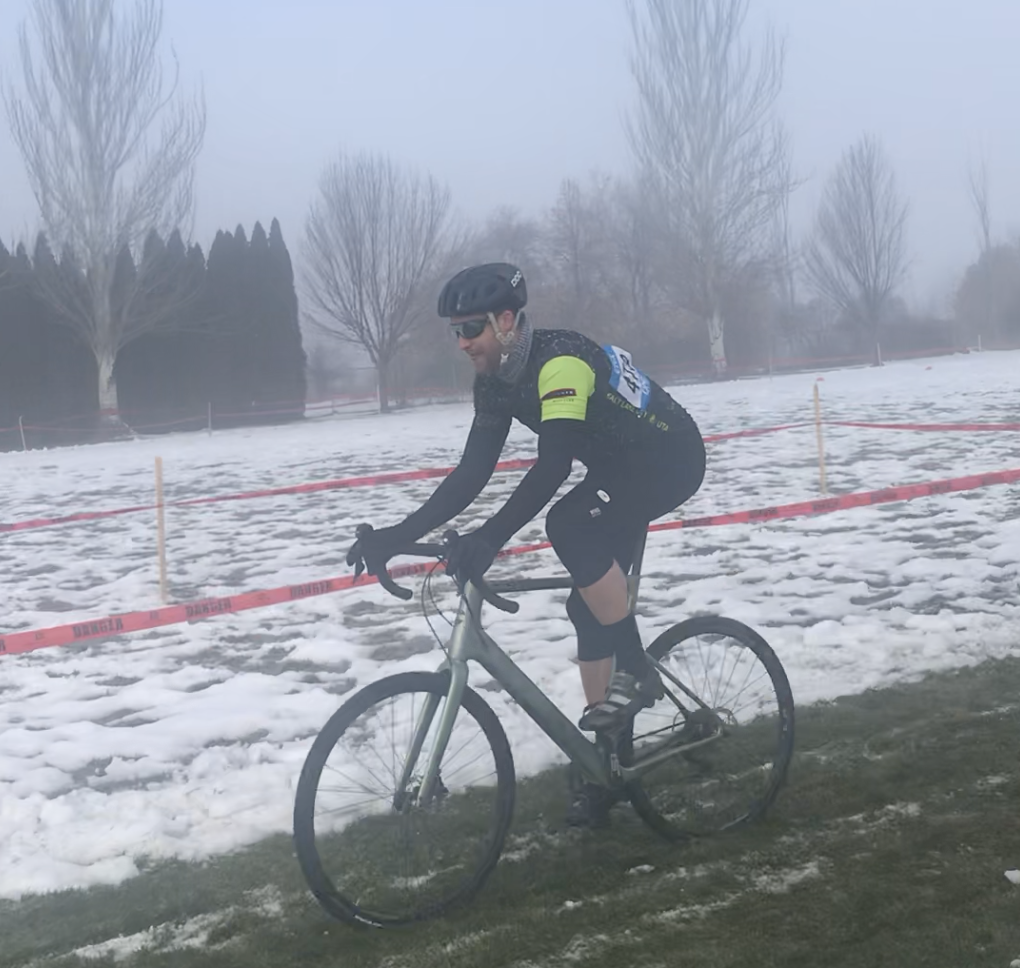 "You rode cyclocross races on the Cannondale Topstone GRAVEL bike?"

That's right. This fall, I've lined up for EIGHT (count em . . . 8) cyclocross races in the UTCX series in Utah. Each week has been different. At the end of the summer, we were racing hot & dusty dirt tracks. In the heart of autumn, we were racing super fun grass courses. And by the time Thanksgiving rolled around, we were onto snow and mud (pictured above).

Now, at the start lines, I did get a few funny glances. And a handful of people did ask "what is that bike?" But not that many. This bike fits in relatively well at a cross race. But how did it ride?

Other than the odd "super-technical" singletrack descent full of roots and rocks (which are rare in cross races anyway), this bike was GREAT in the mud, sand, and grass. The only times I felt outmatched on the bike were times when other racers also felt under-gunned on a cross bike.

So kudos to Cannondale for creating a "Gravel" bike that feels at home on a cyclocross race course. What a blast!
If you've got 30 minutes, check out Lachlan Morton on his new carbon Cannondale Topstone in the GBDuro 2019. He claims that this race makes him more nervous than the Giro D'Italia AND the Vuelta a Espana. The race is a self-supported pedal on a meandering course of road, gravel, rivers, trails, towns, & mud from the bottom of the UK to the top of the UK . . . all on the new Topstone.
© COPYRIGHT 2019. ALL RIGHTS RESERVED.